Read our top tips for air rifle shooting for beginners. Mastering theses top tips will make you deadly in the field.

If you are looking for the airgun basics before you hit the field visit Hawke Academy to learn more about airguns, how to use them and much more. 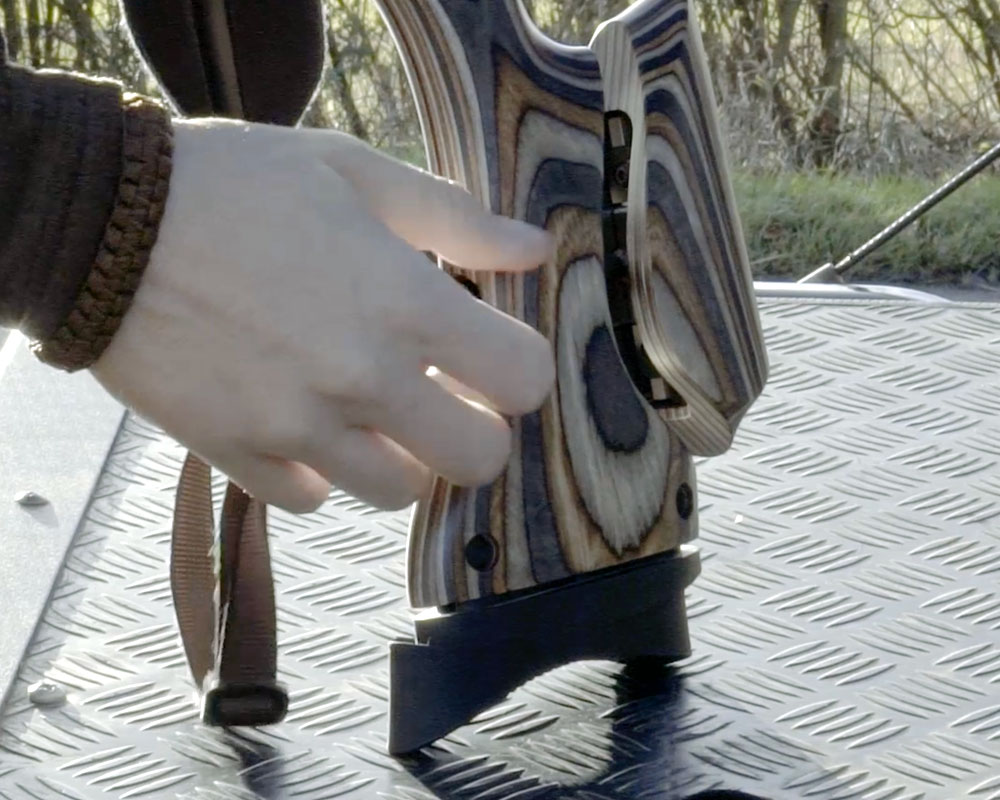 It’s essential to have a comprehensive of experience with any air rifle before taking it into the field. You have a responsibility to your quarry to deliver a quick and humane despatch. The more time you spend shooting your air rifle, the more intuitive your handling will become. Core handling elements such as mounting the air rifle and aligning behind the scope will become second nature. You will better anticipate the trigger release point and develop a smooth follow through. What happens at the stock affects what ultimately happens downrange. 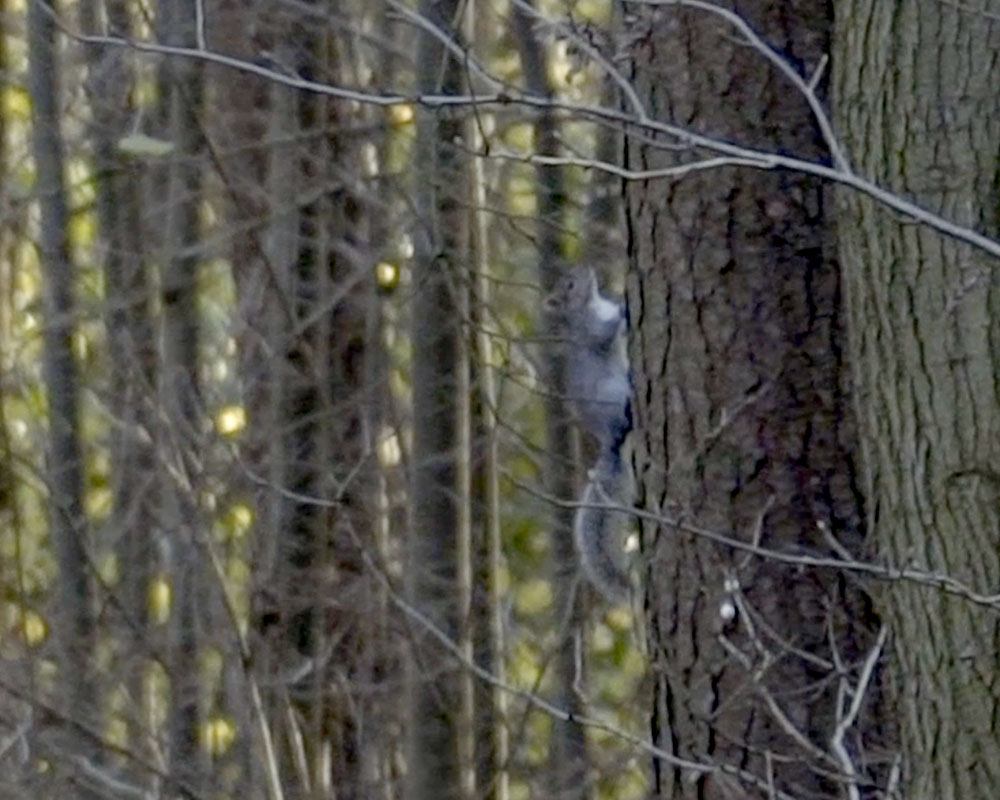 Learn about your quarry

Your quarry has earned its right to flourish in the wild through many generations of evolution. It has become shrewd and perfectly evolved to survive and prosper in the midst of equally evolved and determined predators. If you hope to be successful as an airgun hunter you must be able to overcome your quarry’s defences and outsmart their senses. You must train your mind and body, mastering the art of fieldcraft.

Understanding the habits and behaviours of your quarry is critical to your success at this allows you to predict how they are likely to react to different situations. Often rabbits prefer to graze in the early mornings and evening, but they can quickly become nocturnal if subjected to a high level of hunting pressure. Woodpigeons typically have a favourite roosting spot, which can yield good results if you invest the time to track their pattern of movements. 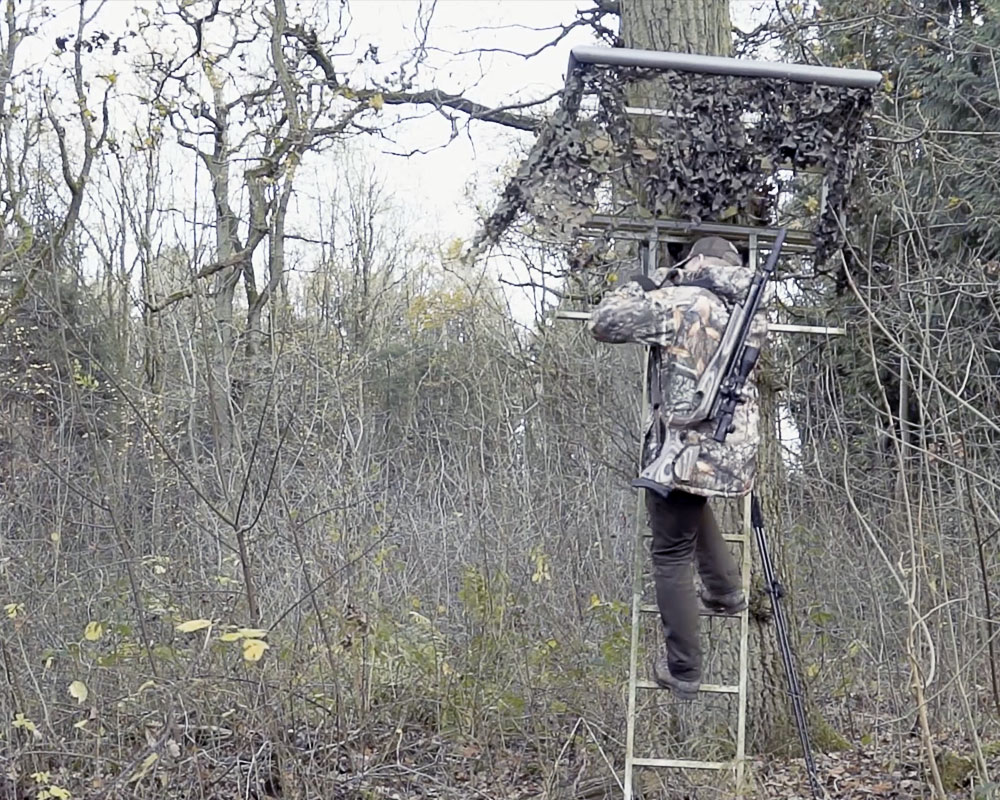 Most practice sessions on the range consists of a stationery target placed downrange with little if any incline/decline and a comfy spot to rest your rifle. Of course, out in the field there are no such luxuries and you will often find yourself in awkward positions trying to find a suitable rest to support your air rifle. Spend time walking through the woods and simulate taking shots at a variety of angles using the surrounding trees and other makeshift rests. Also, practice getting your shots off quickly without compromising on accuracy. That squirrel up in the tree won’t stay still for very long. 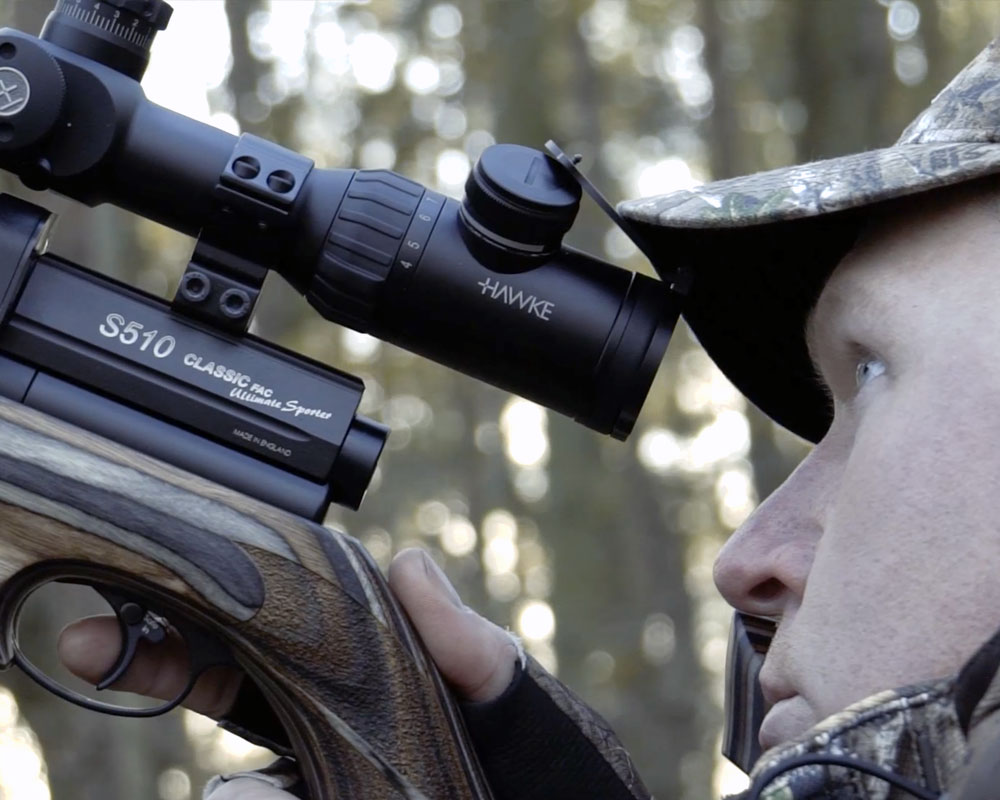 Often the weakest element of many hunter’s repertoires, trigger position, control and follow through are vital elements to get the very best accuracy from your air rifle. The correct position placement of your finger on the trigger is on the pad of your finger approximately half way between the top of your finger and the first joint. The trigger finger placement should be placed in such a position that your finger draws straight back when firing the gun without disturbing your point of aim.

Maintain the same position and direction of pull throughout, even after the air rifle has discharged. This follow through procedure maintains control throughout the firing cycle and avoids the possibility of snatching the trigger. You can practice this movement yourself by aiming at a small object or target that is easily visible. Look for the finger gap, then while aiming, pull the trigger. Focus on your crosshairs, which should not move off the target. If it does, then re-adjust and try again. Practice this technique regularly until the movement becomes second nature. 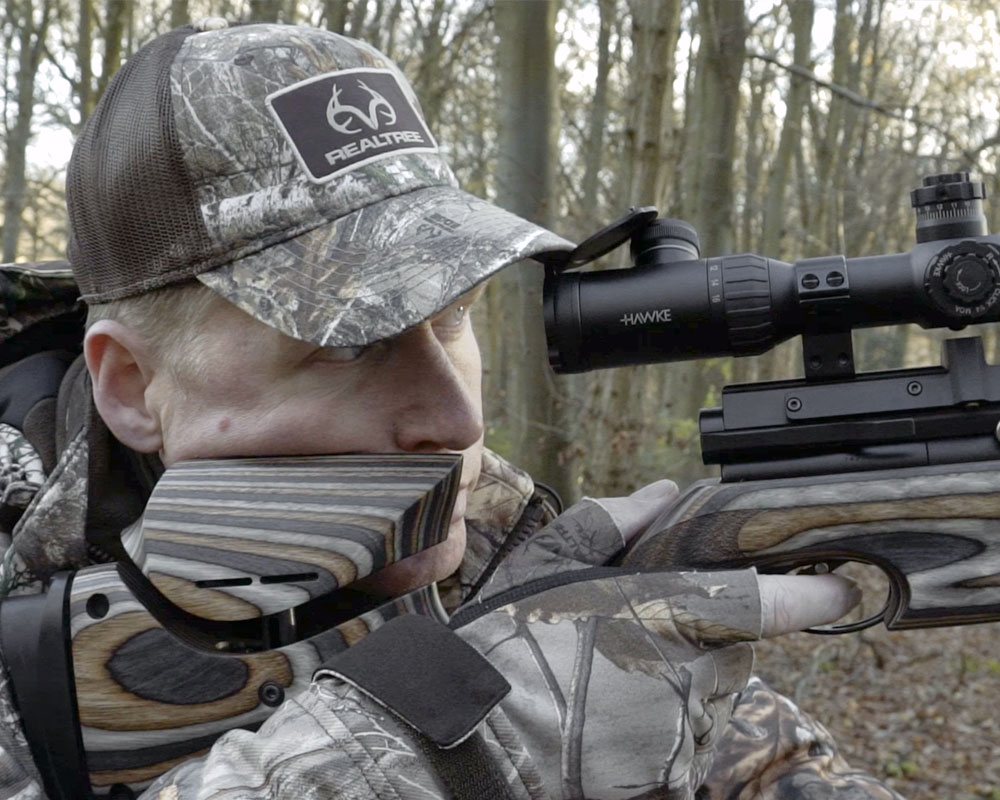 No matter how solid your rest or secure your position, you will be constantly moving around behind the air rifle as a result of your breathing. This movement is significant and can become exaggerated when hunting due to elements such as physical exertion, being in uncomfortable shooting positions or often just through the exhilaration of the hunt. Learn to control your breathing and extend your natural respiratory pause for a couple of seconds during the final aiming and firing process. This respiratory pause helps you maintain a natural point of aim and goes hand-in-hand with your perfect trigger control. 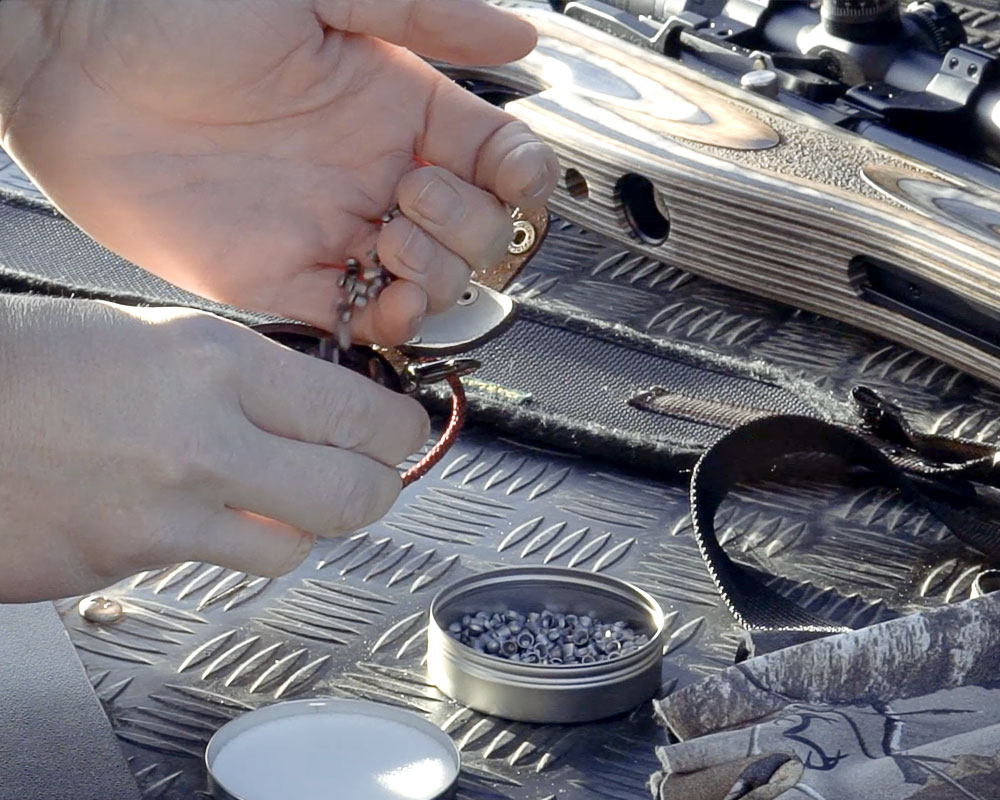 There are as many views on which is the best pellet as there are on the best choice of air rifle. The reality is that each rifle and barrel is different and will not necessarily perform in the same way with different pellets. However, it really is worth spending time testing different makes, weights and shapes of pellets to find what suits your barrel. Spend an afternoon with a few tins and shoot a series of groups, preferably in different wind conditions to find out what works best for you. 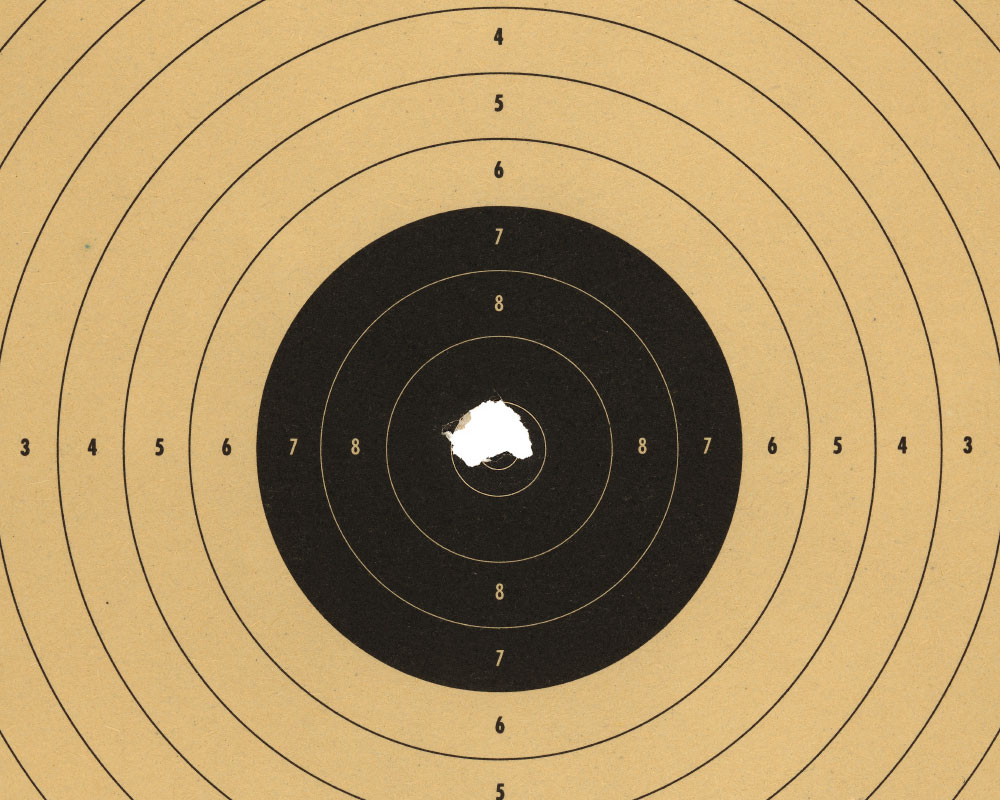 Most hunting air rifles for small game typically produce a power output between 12ftlbs and 30ftlbs of muzzle energy. Whilst these airguns can be supremely accurate at ranges in excess of 50 metres, the pellet’s trajectory can drop off dramatically over longer distances and will be more affected by environmental factors such as wind. You need to fully understand the trajectory of your chosen projectile at various increments throughout its flight and calculate the aim points for each distance.

Depending on the power output, calibre and typical hunting distances, you should choose the most appropriate distance to set your zero. For a 12fpe rifle 30 metres is usually a good option, with 40m for 30fpe rifles. Once you have decided on your zero and set up your scope accordingly, set up targets from 10m out to 50m (or beyond) at 5m increments and take 3-shot groups at each target. You will then see the appropriate holdover/under for each distance. If you have a mil-dot scope or similar, you can use the additional aim points on your scope’s reticule, identifying which works for each distance. 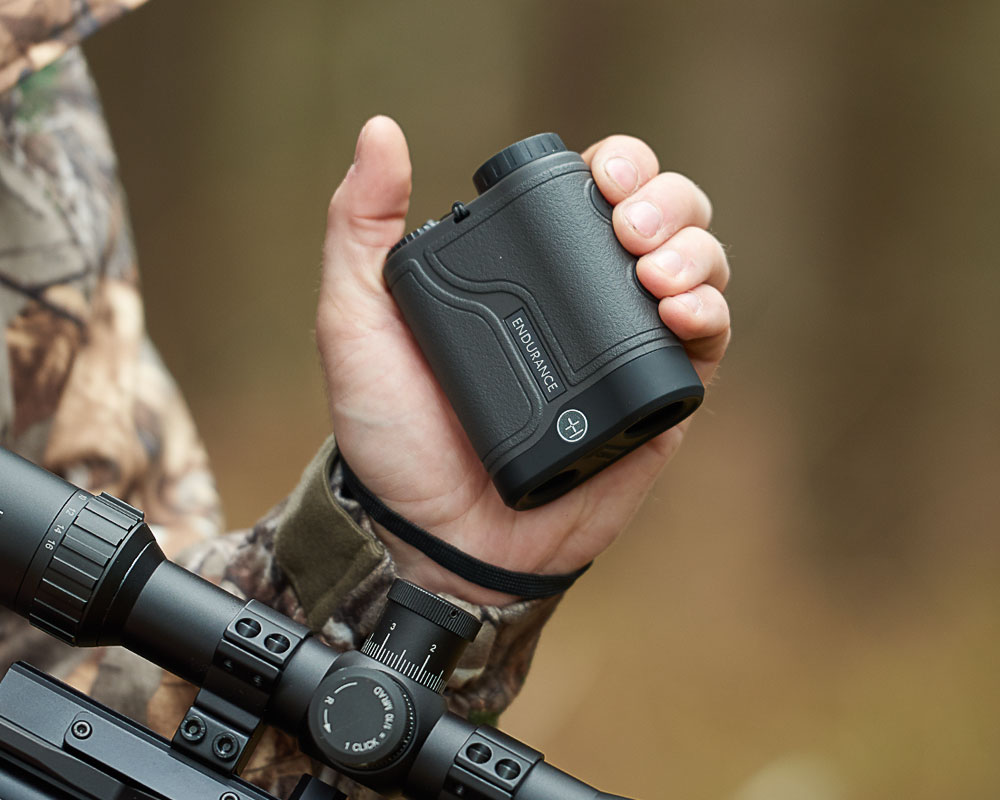 Knowing your pellet’s trajectory is an essential part of shooting and airgun, but you must also know where your quarry falls upon that arc. There are a variety of methods you can employ to ascertain this vital information. Laser rangefinders are useful here, but other methods are also dependable.

Those using a mil-dot scope can use the dots on the reticule to ‘bracket’ a target such as a rabbit’s head or a pigeon’s body to judge how far away it is for a given magnification. This can be fast and intuitive for those who have mastered the technique, but it takes time to perfect. It is also possible to use the focus adjustment on your riflescope. Capture your quarry in the crosshairs and adjust the focus ring until the image is perfectly in focus. This works better at higher magnifications as the depth of field is much shorter, yielding more accurate results.