Of all the wondrous creatures of the Great North Woods, perhaps none says “wilderness” as perfectly as the Common Loon. The haunting cry of the loon has fascinated visitors to northern lakes for as long as there have been people and lakes and loons.

Fortunately for us they are widespread and as the name suggests, common enough that almost everyone has as one time or another heard their wavering calls. Common Loons are found all across the northern tier of the United States and virtually all of Canada. The Common Loon winters along both coasts of the U.S. , close to shore in bays and estuaries, and as far south as Mexico.

The songs they sing are eerie and charming at the same time, and even their Latin name, Gavia immer, has a poetic quality to it. Loons, quite simply, are the iconic bird of the northlands.

They breed in small ponds and enormous lakes alike, often choosing a small, secluded bay for breeding. Loons usually lay two eggs in a nest made of mounded twigs and grass and both adults share nesting duties. Clumsy on land, they are amazingly graceful on and under the water, where they catch fish and small crustaceans. They can and do consume surprisingly large fish at times, but often they are content to eat minnow-sized prey.

Common Loons can live to twenty years or more in the wild and mated pairs were once thought to stay together for life, but new research suggests that adults are often displaced by rivals. Mated pairs will defend their breeding territory fiercely and some of their loudest cries occur if another loon appears in their chosen territory.

Adults out feeding alone may be remarkably tolerant of humans, sometimes surfacing within a paddle length of a canoe or kayak, but nesting loons and those with chicks are very sensitive to human disturbance. When they are very young, chicks will often famously ride on a parent’s back. Good binoculars or spotting scopes are the best way to see nesting loons and their newborn chicks. 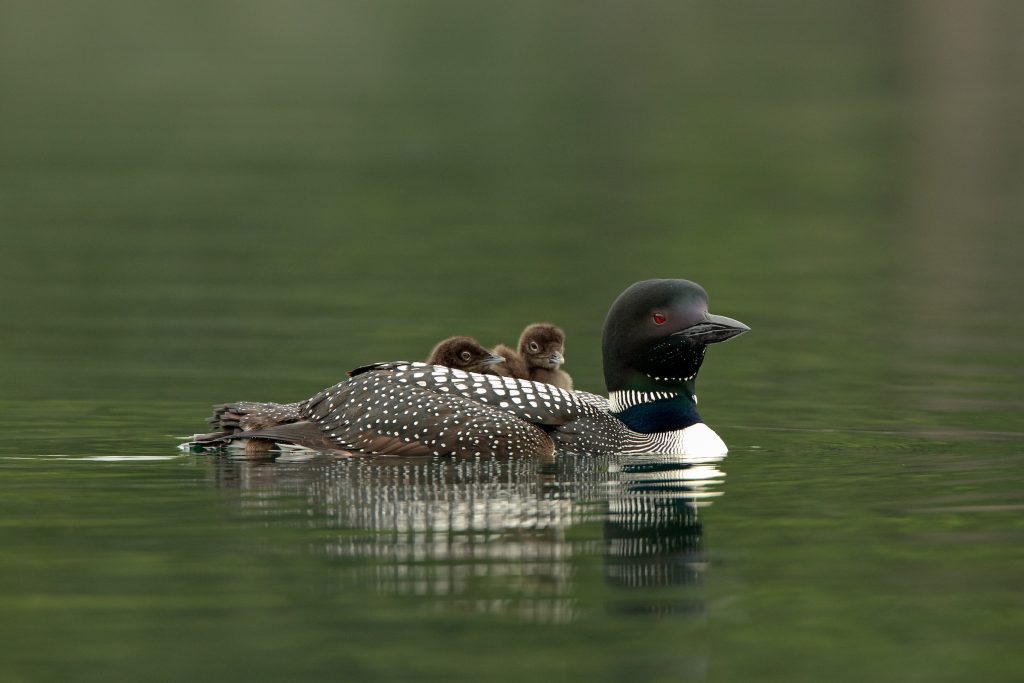 Loons sing day and night and during those sweltering midsummer evenings, when the air is still, you will frequently hear loon pairs singing their yodeling song to other loons on other lakes nearby. Movie makers love to use loon songs in the backgrounds of their spookiest thrillers. The sound is haunting, of course, but it’s also soothing to people who are familiar with the echoes of loon songs in the night.