Whatever you call them, grizzly bear are one of the most adaptable apex predators in the world today. In North America they are found from the central Rocky Mountains to well north of the Arctic Circle in Canada and Alaska.

“Ursus arctos horribilus.” What a terrible name for a big, beautiful creature: The grizzly bear. Famed American explorers Merriweather Lewis and William Clark were the first to describe the large omnivores to science. They called them “grisly,” or sometimes, “white bears,” for the silvery-white tips of the animal’s long guard hairs. In parts of the high arctic, especially along the coasts of Beringia, they are known as brown bears. But today many scientists believe there is only one species. They are all grizzlies.

Whatever you call them, grizzlies are one of the most adaptable apex predators in the world today 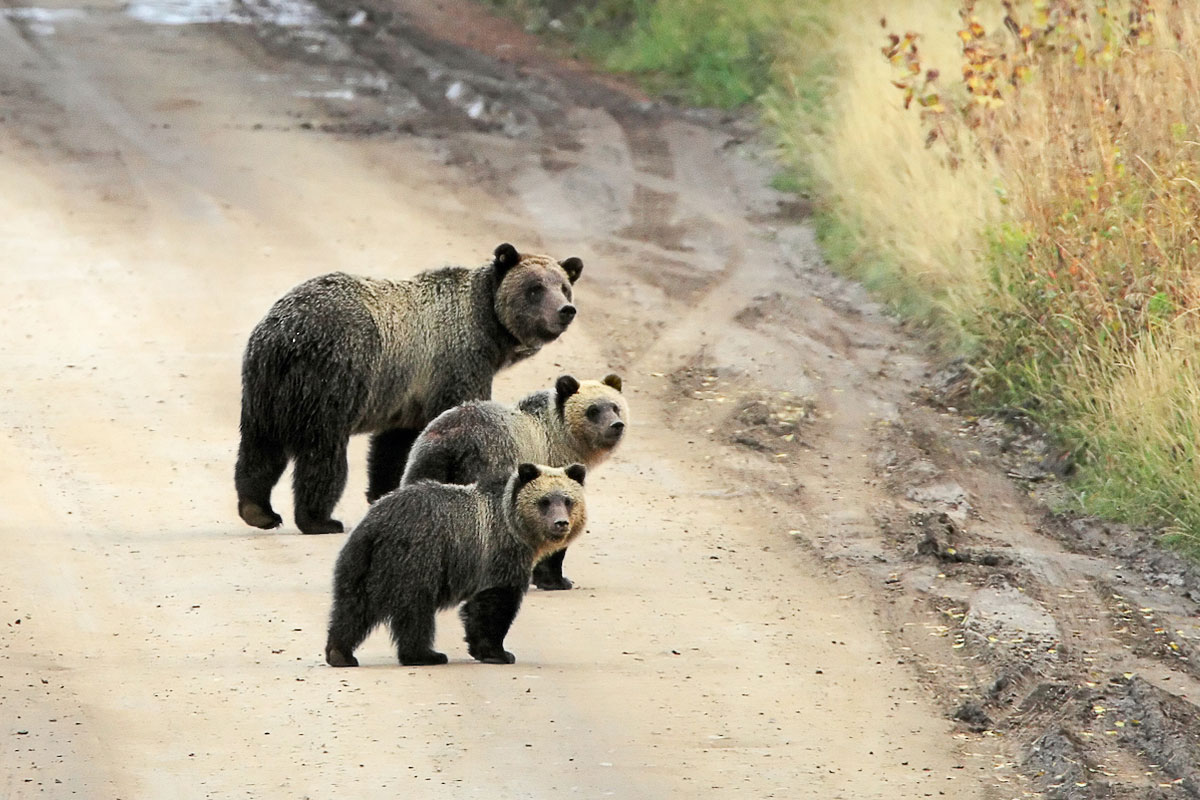 Grizzly bear sow and two cubs on mountain road in the autumn.

Whatever you call them, grizzlies are one of the most adaptable apex predators in the world today. In North America they are found from the central Rocky Mountains to well north of the Arctic Circle in Canada and Alaska. There is recent evidence suggesting that grizzlies are even interbreeding with Polar bears where their ranges overlap.

Part of what makes them so successful is their ability to find food virtually anywhere. At certain times of year, especially in the spring, you’ll find them grubbing for starchy roots, feeding on succulent grasses or pillaging winter-killed ungulates. In summer they might be high in the mountains turning over rocks and gorging on tiny gypsy moths or chasing down newborn elk calves. When fall comes, berries will form a huge part of their diet, and sometimes grizzlies can be seen excavating squirrel middens and stealing the pines nuts cached there.

Three newborn grizzly bear cubs perch on a rock next to a river in Wyoming.

Grizzlies, like most bears, mate in the spring or early summer and through a process called delayed implantation, the fertilized eggs remain unattached to the uterus until late fall. At that time, if the female has gained enough weight to survive the winter, the fetuses begin to develop and the cubs are born in the den.

When they emerge from the den for the first time with their mother, the cubs have disproportionality huge claws and heads – trademark physical features of the adult bears. Fully mature, healthy female grizzlies commonly give birth to two or three cubs; occasionally four. But survival for the cubs is tenuous at best and most will not grow to adulthood. 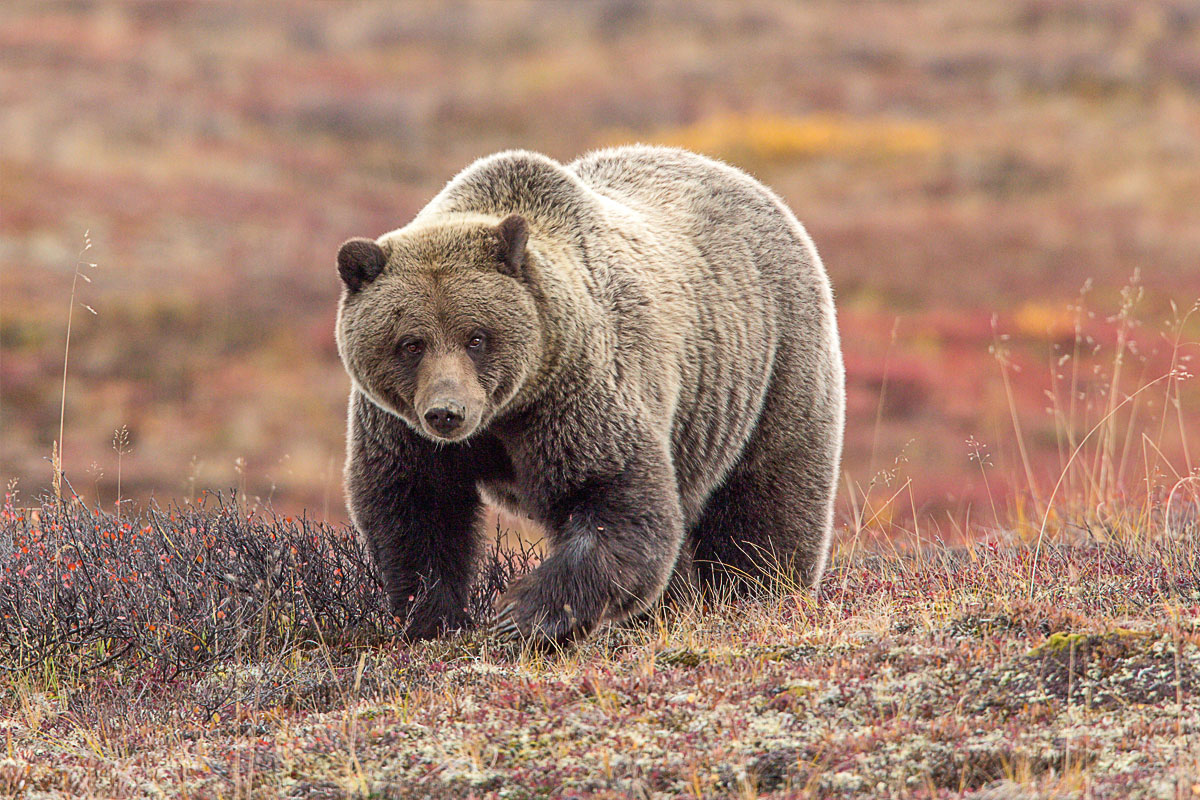 Grizzly populations are stable in Canada and Alaska, and they are increasing their range south of the Canadian border in the northern Rocky Mountains. Naturally, this expanding range has recently brought some of the bears into conflict with the human inhabitants of the region, but by and large, the large predators are coping well with their growing proximity to people. If humans do their part and remove potential bear attractors like unsecured trash cans, pet food left unattended, open landfills, etc., conflicts can remain infrequent. 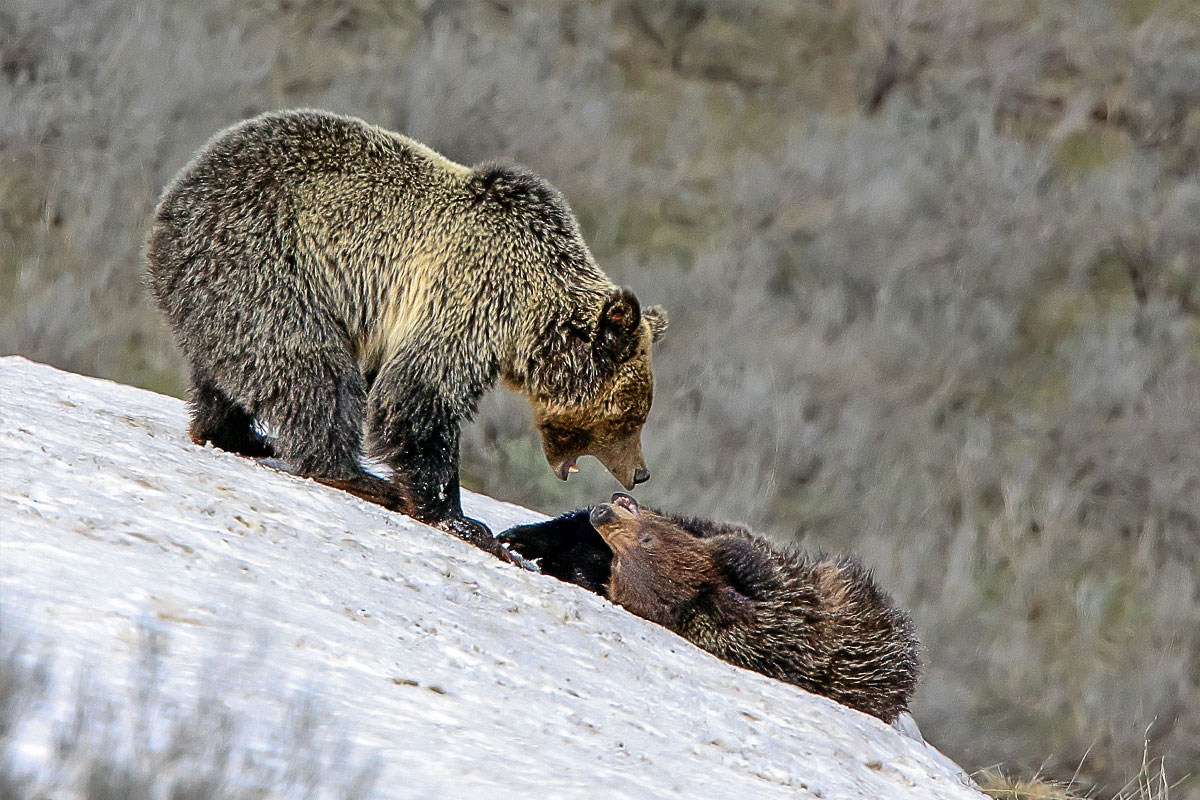 Of course, grizzly bears can be fearless, intimidating animals, and people are wise to give them a wide berth, yet whoever gave these magnificent animals the Linnaean name, Ursus arctos horribilus, probably didn’t actually spend much time around them. Horrible they are not.