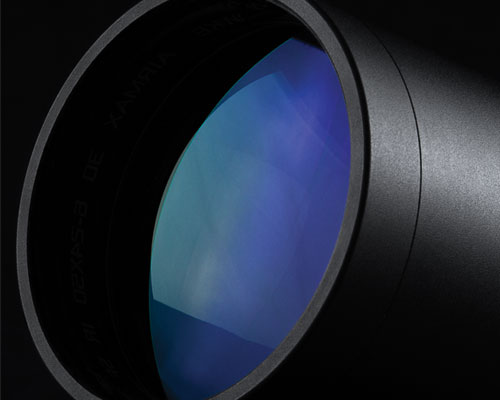 The ability to see well in low light is determined by pupil size, which can diminish with age. The principal of using a riflescope with a large objective lens is to generate a larger and brighter image for the eye and simply put, the more light reaching the shooters eye the clearer the view. Light transmission through a riflescope varies due to the reflective nature of the surfaces and lenses within the riflescope. These surfaces will impact the amount of light reaching the eye. Learn more about riflescope parts and anatomy.

As a rule, the fewer surfaces the light has to go through the more light will reach the eye, ensuring a better image. Optics are built with many lenses to ensure they work correctly so to overcome the light transmission manufacturers will coat the lenses, ensuring they transmit more light. Hawke Optics riflescopes have between 11 to 21 layers of coating as well anti-reflective surfaces within the tube which controls internal light, ensuring the brightest image with no ‘whiting-out’ or stray light.

When selecting your riflescope take into consideration the lens quality, amount of coatings and objective size. The best way to judge a riflescope for low light hunting is to have more than one to choose from and to do a careful comparison in low light conditions with naturally coloured objects. 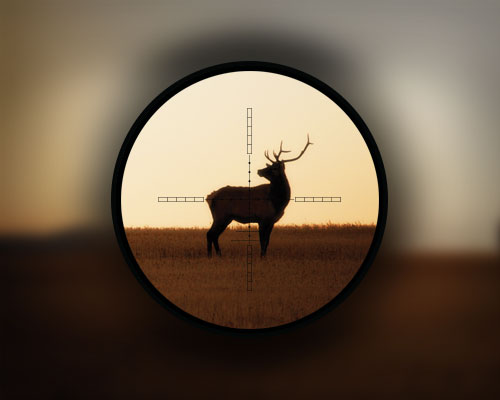 One of the most popular simple solutions to low light hunting is to buy a riflescope with an illuminated reticle, whereby a light source is directed onto the aim points of the reticle, highlighting the reticle in red, green or blue.

Illuminated reticles are most useful at dawn or dusk, after this time it is better to illuminate the target with an external light source.

For those countries that allow hunting with a laser one of the tried and tested methods for seeing the point of aim in low light conditions is to fit a laser pointer to a rifle. The most common method of using a laser is to mount it above the centre of the scope and pointing down to the zeroing distance of the rifle. This allows the red dot to continuously line up with the upright cross of the reticle.

One disadvantage with having the laser above the riflescope is that it’s further away from the barrel and it becomes more difficult to predict the point of impact at closer ranges. For very close range shooting an option that can prove useful is to mount the laser on the side of the scope and as close to the height of the barrel as possible. When the laser dot is zeroed in on the point of impact at 15 yards, for example it can be used as an aiming mark for targets between 10 and 22 yards without being more than .4 of an inch out.

With some practice and by understanding where the dot sits in relation to the point of impact it is possible to shoot accurately, however, after 25 yards (some pointers would work out to about 40 or even 50yds on a clear night) it’s better to revert back to the scope’s reticle and make use of the extra magnification as well. Hawke Optics has several laser targeting system options. 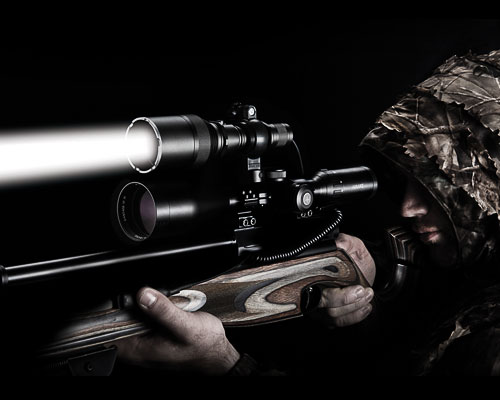 Lamping kits are popular for low light hunting; they are affordable & easy to use. However, they sometimes require a power source which can be awkward to carry therefore lamping with a partner can be a benefit.

Alternatively, it is popular to mount a lamp directly onto a rifle scope. The beam from riflescope mounted lamps are bright enough for most ranges. The problem with lamp kits is bright lights can easily scare animals but if the intensity is gradually increased on a dimmer switch the animal will tend to stay still for longer and if a red or green filter is used they seem even more at ease. 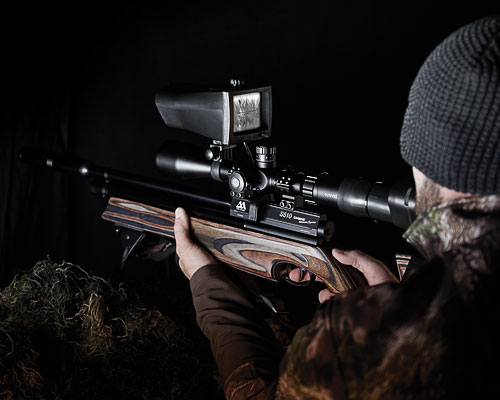 The offering of night vision equipment is getting larger with a wide choice to allow shooters to continue hunting after dark. There are a variety of options on offer including dedicated night vision riflescopes and night vision kits that mount to standard day riflescopes.

Mounted night vision equipment, such as NiteSite, converts day riflescopes into powerful night vision systems. Using a state of the art built in infra-red camera that fits to the day riflescope the NiteSite device transmits the scope image, including the cross hairs of the riflescope, onto the LCD screen.

For extra visibility with the night vision equipment infra-red (IR) illumination torches can also be mounted to the riflescope.